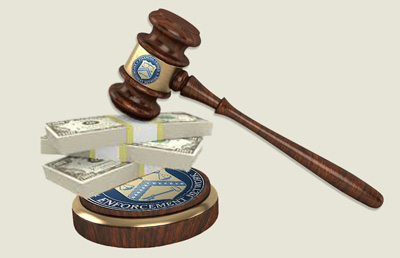 According to news reports, FINCEN notified Thomas Haider, former Chief Compliance Officer of MoneyGram that he could be fined up to $5 million for compliance failures that resulted in the money-laundering fraud scheme where in November 2012 MoneyGram agreed to forfeit $100 million and entered into a deferred prosecution agreement with the Justice Department for aiding and abetting wire fraud and failing to maintain an effective anti-money laundering program in violation of the Bank Secrecy Act. .Tom Haider, who was the CO at the time, and his legal counsel are expected to meet with FinCEN officials to contest the fine, the news have also reported. Note: FinCEN announced on Dec 18,2014 that it had assessed a Civil Penalty of US 1 million and was seeking to bar him from the Financial Industry, see here: http://1.usa.gov/1xahywP .

According to court documents, MoneyGram processed thousands of transactions for its own agents known to be involved in an international scheme that defrauded tens of thousands of members of the U.S. public out of at least $100 million. MoneyGram profited from the scheme by collecting fees and other revenues on the fraudulent transactions from 2004 to 2009. More on this story here.. This proposed fine – and others – have caused a shift in prosecution of AML/BSA cases that is important to analyze,

There is a growing trend in the US for individuals – not only institutions – to be named in prosecutions and enforcement actions, a trend that is having a number of implications to financial institutions, to the compliance profession and the implementation of compliance programs, from large banks to Non-Bank Financial Institutions and MSBs. Besides the Thomas Haider case, in February 2014, FINCEN fined Harold Crawford US $25,000 for substantial anti-money laundering compliance failures. Crawford was the global AML compliance officer. for Brown Brothers Harriman an investment bank and securities firm, .who was also fined $8 million in the case. See more about this case here.

In the great article by the Navigant team of Ellen Zimiles, Robert Pargac, Susana Rodríguez, and Miles Harter, entitled “The Individual as Target: The Next Wave of Enforcement Actions” they write: “As the Department of Justice (DOJ) has increased enforcement pressure through the use of Deferred Prosecution Agreements (DPA) and Non-prosecution Agreements (NPA) (DPA and NPA collectively referred to as “Agreements”) during the past decade, there has been a gradual increase of enforcement actions by the DOJ and other regulatory agencies including the individuals involved in the subject activity” […} “…is certain today that individuals will more frequently be named in prosecutions and enforcement actions.“. And the article goes on to question the future of AML/BSA prosecutions, the future of the compliance profession and of compliance procedures in Financial Institutions. We picked and chose these questions for our panel on June 25th at IMTC USA 2014 in San Diego:

The article by Navigant brings an idea that should make us think: “As the inclusion of compliance personnel in prosecutions and enforcement actions would move the compliance programs to a more conservative paradigm, this risk-based approach may result in excluding certain groups. The money services business industry, for example, is deemed a high-risk financial industry segment. As the probability for individual liability of compliance personnel increases, a compliance manager may determine that the pursuit of such business is too risky, not just for the institution, but also for the compliance manager, herself. The result could be the exit from the line of business. This could also result in increased pricing and a lower level of service, as services become limited”

IMTC’s Advisory Board Member Connie Fenchel, President of AML Experts will be the Moderator of our panel. Connie commented: “I think it is extremely important that we all reflect – compliance professionals, business executives, legal counsel, on the impact of this new strategy to combat and punish AML/CTF lapses in all financial institutions, from big banks to small money transmitters. We have to prepare ourselves at all levels for this new reality“.

A word from panelist Christine Carnavos: “Regulators need to ask themselves – will punishing compliance officers help build an effective regulatory structure – and how – or will it have a “chilling effect” on the very result desired? Is it fair to punish 5-10 years after the alleged violations or is it an abuse of government power?” And the MSB industry should ask itself -how are we equipped to address the risks of individual liability for our compliance officers, management and Board of Directors?“