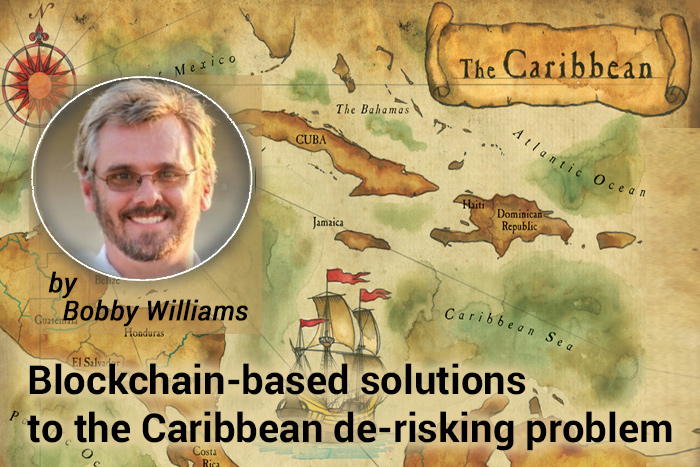 De-risking was an acute illness for the Caribbean financial sector in 2015 and 2016. In 2017, the height of the fever has broken, but the patient is still sick. Though correspondent banks in developed countries are no longer dropping services to Caribbean banks at a rapid pace, the region’s economies remain encumbered with a residue of increased costs, forgone opportunities, and reduced efficiency.
The problem developed early in this decade, as a reaction on the part of banks to the heightened scrutiny and increased capital and liquidity requirements they faced in the wake of the 2008 financial crisis. Facing an increase in costs – particularly on account of the increased due diligence required by enhanced anti-money-laundering/countering the financing of terrorism (AML/CFT) risk management procedures – major banks took a close look at the bottom line associated with servicing the customers Caribbean banks and their customers, and decided that the relatively small amount of business wasn’t worth the hassle.

Caribbean non-bank money service businesses were among the first to feel the squeeze. Jamaica’s cambios – small foreign exchange operations typically servicing the country’s tourism industry workers – were affected by a 2012 advisory from the Financial Action Task Force identifying them as entities at high-risk for involvement in money laundering. Subsequently, according to the IMF, “multiple overseas correspondent banks gave notice to Jamaican domestic banks that prohibited transactions on behalf of cambios through their accounts, given the difficulty of undertaking due diligence on such transactions.” Cambios were effectively cut off from their cash supply, and had to find creative work-arounds to service their customers.

This environment was also creating headwinds for start-ups in the Caribbean’s nascent fintech industry, such as digital currency exchanges and mobile money providers. However, these attempts were not quarantined from the de-risking pressures plaguing the traditional banking sectors.

In 2014, digital currency vendors reported to the UN Economic Commission for Latin America and the Caribbean (ECLAC) that no bank in the region would take their deposits, having indicated that any relationship to Bitcoin was seen as a red flag. New and unfamiliar technology brought with it the risk of association with money laundering and criminal activity, and banks were not prepared to shoulder the high cost of due diligence for the sake of a relatively small amount of business. Caribbean banks were deeply concerned with how their overseas banking partners would view relationships with such customers in the de-risking climate — and they had legitimate reason to be concerned.

As of 2017, the wave of broken CBRs has slowed, with many of those that were lost having been replaced with other arrangements. Belize Bank, to take one example, has maintained tenuous links to the American financial system through the use of intermediaries in Turkey and China. However, this so-called “nesting” of transactions through intermediaries is expensive, and certainly doesn’t help the cause of enhanced bank transparency. Moreover, the increased costs to banks are being passed on to customers in the form of higher fees. Customers around the region are complaining, with some of the more economically marginalized opting to close their accounts and join the ranks of the unbanked.

All this comes at an interesting time in the evolution of financial technology; the world is currently witnessing the rapid expansion of newly available applications surrounding so-called “blockchain” or “distributed ledger” technology. What started in 2009 with the launch of Bitcoin has evolved into a diverse array of platforms that can support a broad variety services – financial and otherwise – all built around the new and interesting things that can be done using strong cryptographic technology. A more recent generation of blockchain platforms – such as Ethereum and Tezos – embraces the more “programmable” aspects of distributed ledgers and cryptocurrency, such that transactions can coordinated across organizational lines like never before. Thus, it’s worth examining what these technologies can do to help adjust to the economic burden that de-risking has placed upon the Caribbean, and to make the region’s financial system more resilient in the face of its next economic storm.

Blockchain technology offers several features that make its use in supporting international payments an appealing prospect. Contrary to the assertions of early Bitcoin enthusiasts, payments made through a blockchain can be highly traceable, a quality that could be used to support a high-level of automation in terms of KYC and regulatory procedures. This could reduce the cost of compliance that has been a cause of de-risking in the Caribbean. However, the real long-term benefit to the use of this technology may lie in its ability to dis-intermediate correspondent banks altogether, such that money could be safely transferred between institutions and individuals without having to pass through an expensive series of middlemen.

For example, in the Caribbean, one idea in the air is to use blockchain technology to establish an inter-bank payment system for the region by issuing an e-currency on the blockchain. Bitt, a company from Barbados that currently facilitates international money transfers with bitcoin, has indicated their intention to work with central banks to create such a system. Assuming various regulatory hurdles can be cleared – no small assumption – the new system would enable international money transfers within Caribbean countries to be made using legal tender transactions registered on a blockchain. Currently, when money is transferred between, for example, a bank customer in Jamaica and one in Trinidad, the money traverses one or more correspondent banks in the United States. This is significant expense, particularly in the post-de-risking era. It is also a cost that represents an ongoing drain of financial resources from the regional economy. A blockchain-based system could enable far more direct means of money transfer in the region and potentially make economies more immune to de-risking activity in the future.

Though blockchain technology does currently have a “Wild West” aspect to it – and this is an ongoing detriment to its adoption — Central Banks are very interested in learning how it can be tamed, and used to meet the needs of mainstream financial institutions. Startups like Bitt may not just be proposing pipe dreams. There are proposals for ideas like Central Bank-Issued Digital Currency and Digital Fiat Currency that are already being experimented with. Such systems could take advantage of the efficiency and transparency aspects that blockchain-based systems can provide, without forcing Central Banks to surrender control over national monetary policy.

At the same time, corporate projects like the Enterprise Ethereum Alliance and IBM’s Hyperledger initiative are sanitizing the technology to make it appropriate for use by businesses and governments. Microsoft, a member of the Enterprise Ethereum Alliance, recently announced that it is releasing the Coco Framework for enterprise blockchain networks. This will provide an additional software layer that runs over top of more general-purpose blockchain solutions, such as Ethereum, and adds a number of controls that appear to address many of the privacy and governance concerns associated with the use of blockchain technology to operate across institutional boundaries.

While it’s certainly within the capability of the new distributed ledger technology to support a secure and efficient inter-bank transfer network within the Caribbean, it’s not for the lack of available technology that no such system exists today. A similar setup – the CARICOM Multilateral Clearing Facility – helped boost regional trade during the 1970s and early 1980s, until it collapsed after having evolved into a vehicle for countries to take on external debt. That system was built on top of 1970s technology, and it worked well – until poor policy choices brought it down. A system built on 2017’s most state-of-the art blockchain technology would be vulnerable to similar risks.

Thus, while blockchain and distributed ledger technology could certainly be used to enable more efficient money transfer systems, the problem that ultimately needs to be solved is that of cross-border governance and international cooperation. Alas, those are political issues; technology can only do so much.