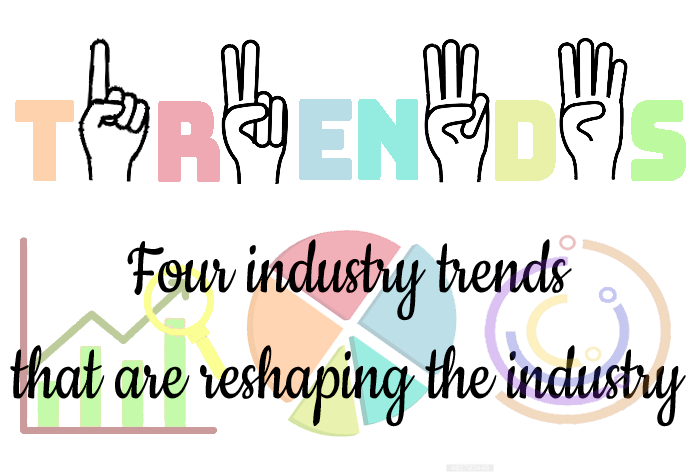 The Money Transfers & Remittances industry is a relatively young industry. Started in the early eighties, it saw a great technological breakthrough, the fax, that transformed the way orders were filled in distant corners of the earth and transmitted for payment. The evolution since then has been mesmerizing. I analyze the trends in the industry for my presentations on “The State of the Industry” (see the latest one at IMTC LATAM 2019 in Cancun in April 10, 2019). Lately, I have been having more and more trouble in assembling the facts and looking at trends due to the constant array of news and developments.

It has nothing to do with the disruptive depiction that newcomers or outsiders want to portray of the industry. Hundreds of articles comparing the industry to “Blockbusters” or the Travel Agency business. For me, I feel this is more of a moving glacier gaining speed.

I will pick some important trends that I feel are significant and will give you an overall picture of the industry from my vantage point. I do this knowing beforehand that my colleagues will say that I have missed some.

Growth and consolidation of the Non-Bank Financial Institution Sector

NBFIs have had a rough history in the last three decades, not entirely because of their own doing but mainly from the diverse and dispersed services and products offered. Also, because we mostly served the fringes of society, the poor, the migrants, the financial excluded, and the unaccounted for. Banks were hailed as the providers of wealth and development, their owners were the unquestionable “do-gooders”, the architects of regulation, convincing society that they were the only way to progress. Social-oriented governments that “nationalized” banks to solve the problems of the “too big to fail”, fell on corruption and mismanagement, solutions that created more problems to the banking sector. The financial crisis was a wake-up call and since then, measures have been put in place; however, the struggle between regulators and banks continue. New banks are emerging, a new bank culture is certainly developing.

NBFIs grew in the shadow of all these scuffles, always trying to find partner banks that would understand their business. Uneasy relations marred with competition reservations, money laundering fears, regulatory vacuums, law enforcement doubts, and shady characters lurking behind the scenes. From the 1980s onwards the remittance industry grew exponentially, and the World Bank provided the statistics that showed that remittances did exist, were real and were not corridors of money laundering proceeds. Anti-Money Laundering (“AML”) regulation landed a heavy hand on NBFIs with front-line busts, some of them much more show than essence. However, the industry learned, became more professional, compliance was institutionalized, and good regulation was enacted. Of course, there is still a lot to do.

Technology has played a huge role in the growth and development of this international industry by helping with  AML & Counter Terrorism Financing (“CTF”) controls.  Additionally, it has mostly helped with the transparency of the systems in place that makes auditing easier and at the same time it speeds processes and brings costs down. Technology has also brought us the fintech revolution with thousands of NBFIs pioneering ideas, services & products, and now with regulators playing catch-up and investor’s funds pouring down.  Technology brought MMOs, and the disruption in Africa and Asia, lead initially by M-PESA. This is a great example of the power of technological change in spite of early regulation that tried to stifle this development. GSMA work in helping with the development of Mobile Money supported by The Bill and Melinda Gates Foundation and The Mastercard Foundation, is remarkable.

The MSB sector in the US, where roughly 50% is made by the Money Transfer sector, is becoming stronger. The States, through the work of the MTRA and the CSBS, are working in lowering barriers to entry and streamlining supervisory processes, while the relatively new association, the MSBA, is becoming a beacon that is helping this diverse sector to work together. MSBs in Europe, made by Payment Institutions and Electronic Money Institutions, have been strengthen by SEPA, PSD1, PSD2 and more regulatory measures coming into fruition.  This is even amidst the uncertainty of Brexit and London as a financial center. Local Industry Associations have also provided the industry with coherence and influence. Many countries, even jurisdictions where the industry practically disappeared by misplaced regulation, are also revamping their NBFI regulation. Fintech is indeed creating this change.

The evolution of the Money Transfers & Remittances industry has always been a product of partnerships. Since the beginning of time, you needed someone on one side of the remittance corridor sending a payment and someone on the other side making the payments. With couriers, funds and information traveled together. In Hawala, information traveled but funds did not, or they were settled through other means. With the telex, then the fax, then the internet, information traveled faster and faster and remittances moved from days to hours, to minutes, to seconds. Information costs dropped drastically. However, funds, on the contrary, have not moved faster in these last two decades and the cost of moving funds has increased. The surge in the volume of transactions and information speed created the need for enormous cash flow needs. Receiving institutions advanced millions to sending institutions and history is marred by unpaid debts, some of them landing in the courts, with cases going on for years.

The industry has grown through partnerships, much more in the information management side than in the fund management side. Western Union, the top-of-mind brand in the industry, relies like everyone in the sector on those partnerships, some of them spanning years. Newcomers in the industry, from digital-first companies like Xoom, WorldRemit, TransferWise, Azimo, that have made online and app client onboarding their success story, rely on traditional partners in the paying end in most countries they serve. Traditional companies like Western Union and MoneyGram, partner with African mobile companies in the receiving end as well as new crypto and blockchain based companies, such as Coins.ph and Bloom Solutions in the Philippines. Partnerships in the information side have created identity verification services for Know Your Customer (“KYC”), AML & CTF Management (“Regtech”), and cybersecurity services, etc.

New partnerships are also being developed in the fund management side, from cash management companies using smart safes, digital crediting and cash logistic solutions, to payment processors managing faster payments and fraud controls. Even if derisking still plagues the industry, new banks are emerging, providing relief and a sense of hope for the future. Regulators have allowed the creation of new types of banks, such as payments banks, that might change the landscape.

The promise of the blockchain is becoming a reality with Ripple and IBM Blockchain, under the Stellar rails, offering the industry new settlement ways that will certainly speed fund management and lower costs. Using bitcoin for settlements is also speeding the time to market for fintechs and start-ups competing without large amounts of capital. New challenges will emerge but using the power of virtual currencies and tokens to speed fund transfers and settlement is something the industry will certainly embrace. Virtual currencies & the blockchain might be seen as a disruptor for the industry.  However, for me they are welcome partners.

New Mergers and Acquisitions (“M&A”) Creating Competition at the Top

M&As and Initial Public Offers (“IPOs”) are creating competition at the top of the industry’s food chain. Some of the recent news:

There is also news of acquisitions in other markets. Just as an example, in Colombia Banco W (former Women’s World Banking affiliate who became a bank in 2011) has agreed to purchase Pagos Internacionales, an exemplary MTO founded in 1993.

I certainly agree with many colleagues that this activity at the top will change the industry as a whole in ways that we have probably not envisioned yet. It will certainly create more competition and new products and services that will benefit both the industry and its clients worldwide.

Migration Challenges for the Developed World | New Corridors Opening Up

When doors shut down for migrants new doors open up.  For example, Haitians in Chile, stay in the neighboring countries waiting or settling temporarily, like the case of Central Americans in Mexico and Venezuelans in Colombia. It is not only the innate desire to migrate and look for new pastures that have pushed homo sapiens to migrate. We have seen how natural disasters, some of them caused by climate change and wars and violence, push people out of their towns and villages to seek a better life. Now, you don’t need to be told about the better life, you can see it on television.

IOM’s Global Migration Trends portal (IOM)which summarizes twenty (20) facts is a must see. 258 Million International Migrants were counted in 2017, only 3.4% of the world’s population, but becoming the victims of politician’s desires to exploit nationalistic views. 68.5 Million individuals were forcibly displaced worldwide due to persecution, conflict, generalized violence, and human rights violations by the end of 2017. Syria will be rebuilt by remittances and might, in a few years, become a large destination of remittances.

The money transfer industry has diversified, not only providing other services to migrants such as Bill Payments and Top Ups, but has moved beyond regular migrants. It is important to note in IOM’s data that 4.8 Million international students were counted in 2016, up from 2 million in 2000, giving rise to another side of the money transfer industry. PeerTransfer’s growth, the leading provider of global payment solutions for students, which rebranded in 2015 as Flywire, is an example. The growth of the cruise industry and the international workers it employs has sparked the growth of payment providers such as Brightwell, serving more than 150,000 crew members in close to 200 ships worldwide.

Digital money transfer service providers in the US and Europe concede that only 10-15% of migrants move from brick-and-mortar service providers to their online or mobile platforms. So, 85- 90% of their ever-increasing client base is drawn out of individuals previously using bank channels as well as the new young millennials that move for work (or life) to other countries. Money Transmitter Operators (“MTOs”) are now providing business to business (“B2B”) services expanding in a segment served only by banks some years ago. Additionally, Forex firms are serving wealthy individuals with very competitive rates for their investments in many countries. From the 600 B a year in remittances, I have estimated that the industry has exceeded twice that volume.

The developed world must come to grip with how to handle migration and the drop in the fertility rate of women. In most of Europe, the US, South Korea, Australia, Taiwan, Thailand, Japan and also China, the “locals” are declining in number and policies to encourage women to have more children are failing. What will the impact will be? That is the question. Fareed Zakaria, an Indian-American journalist and the host of CNN’s GPS as well as the writer of a great weekly column for The Washington Post, summarizes the migration dilemma in this segment on GPS from April 7, 2019.

There are regional and local trends that shape the remittance industry. Some of these trends are very well described and analyzed by the work published every semester by KNOMAD in their Migration and Development Briefs, the latest one # 31 published in April 2019.