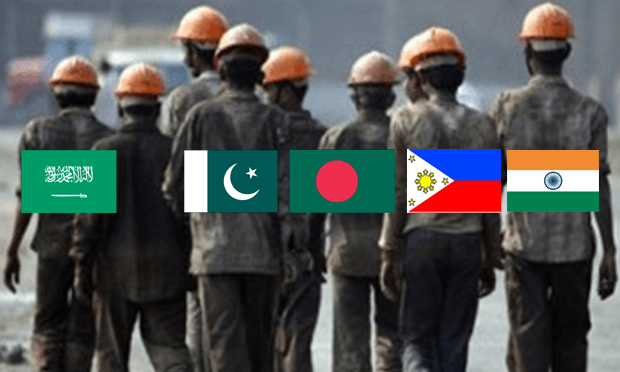 OVERSEAS WORKERS IN SAUDI ARABIA
When migrant workers are left stranded, should governments step in?

The situation in Saudi Arabia for overseas workers is critical. During the oil boom migrant workers went from 5.3M in 2000 to 10.2M in 2015 according to UN figures. More than 1M have lost their jobs in 2016 and remittances are dropping more than 20% every month compared to last year’s figures. Shivaji Sarkar wrote in The Pioneer: “The hiking petroleum price by producing nations itself had caused upheaval and as different energy sources are now being developed, it is leading to an Arabian night.” An Arabian night for the construction companies that are laying off thousands of workers and the OWs that they employ…

Many of these workers are demanding payment of overdue salaries and other monies before they go back to their countries for good. The situation is dire for Indians and Filipinos, although the record is not clear why Bangladeshis & Pakistanis are faring slightly better.

A number of construction companies in KSA laid off thousands of foreign workers and these workers are waiting for unpaid salaries and plane tickets in abandoned labor camps. A diplomatic mission visited KSA to assess the situation of their workers, to meet with the companies and to provide aid packages to starving workers. Now they have begun to bring those workers back home after stranded “pinoy” workers pleaded their government for help (GMA News & Philstar). The Philippines Overseas Workers Welfare Administration (OWWA) approved a financial assistance package to affected Overseas Filipino Workers (OFWs) in the Kingdom of Saudi Arabia (KSA) and their families under a Relief Assistance Program (RAP).

The situation for Indian Workers is about as bad and the Indian Government had to intervene, distributing food to 10,000 starving Indian workers in KSA. Indian workers in KSA number about 3 million. According to this article by Uzair Hasan Rizvi in The Wire: “The number of Indians working in different fields in Saudi – both white and blue collar workers – rose from 34,500 in 1975 to 1.2 million in 1999 and 2.96 million in 2016”. The situation that started at the beginning of 2016 by the laying off of thousands of construction workers, most notably by the Binladen Company as reported by the  Saudi Gazette, led to sit-ins, burning of vehicles, etc. We must remember that Saudi Arabia requires foreign workers to have their employer’s permission to enter and leave the country, and denies exit to those with work disputes pending in court.

It seems the situation is not as critical for Pakistanis in KSA: remittances are up 6% in 2016, close to $600 M a month from about 1.5M to 2M workers contributing to a record breaking remittance volume to the country of $20 Billion for Fiscal Year 2016 as Xpress Money’s COO Sudhesh Giriyan, speaker at the coming IMTC ASIA 2016 in Delhi explained in this Arab News article. It seems that most Pakistanis are not employed in construction work but as drivers and doing other type of jobs.

Remittances to Bangladesh from KSA are about $3.5B a year coming from 1.3M Bangladeshi in KSA; this is about 60% of the remittances to the country (Arab News). Again, Bangladeshi woman are being employed in household jobs and those jobs might be the last ones to go. On the contrary, recruitment of Bangladeshi workers for these jobs seems to be on the rise although it was reported in May this year that 40,000 Bangladeshi maids were sent back by household employer; a recruitment office owner in an interview stated: “The Bangladeshi housemaids were being unprofessional and refused to do their work; many of them were not trained and could not communicate due to the language barrier. These maids were not properly equipped to work in the Kingdom”. The report stated that the Bangladesh government were setting a center in Dhaka for “training and rehabilitation” of domestic workers.

In an article by Arab News entitled “Foreign remittances see 35 percent drop” it reads: “The remittances sent by foreigners [from KSA] to their families fell by 35 percent or SR5.5B ($1.5 B) during July, down from SR15.8 B ($4.2B) in June to SR10.3 B ($2.8B) in July. July marked the lowest volume of remittances in 41 months since February 2013”. It further states that in July 2016 remittances fell by 20% from July 2015 and transfers by Saudi nationals have declined close to 40%:  transfers by Saudi nationals in July this year were the lowest since January 2007.

India has felt the drop in remittances coming from KSA and the Gulf; UAE is the biggest source of GCC remittances to India, accounting for 38%, followed by Saudi Arabia with a 28% share (The National). Of the total remittances to India as reported by the Indian Express,  UAE is #1 with $11B, followed by the US with $11B and the KSA with $10.5B (notably there is a total of $4.7B received by India from Pakistan). The decline in the volume of remittances to India from KSA in 2016 hovers around 6-9% depending on the estimate source, with more precise numbers expected. The decline might be larger though. This decline is hitting Kerala hard, since about 90% of Kerala’s 2.4M emigrants are in the Gulf (Quartz) and remittances constitute the backbone of the economy of this Indian State (Swarajya).

Management of OWs by governments

Management of OWs is not an easy task, both by the sending country (India, Philippines, Bangladesh) and by the receiving country (KSA, UAE): regulating the movement of workers, the companies and agents that recruit them, the visas, the living conditions, etc. Human rights abuses against migrants in Saudi Arabia is nothing new. We do have to remember that in 2013 KSA introduced the Nitaqat law clamping down on unorganized and abusive employment organizations. This lead to more than 150,000 Indians leaving the KSA.

Many articles debate and criticize governments in the handling of OWs and of course there are many things that can be criticized about any government action but I have to admit that I do admire the work Philippines have done and are doing to manage their OWs and to help them, train them, find work for them around the world, make agreements with other countries, etc.  And now in KSA they have told the Filipino workers refusing to leave KSA in fear of not collecting their unpaid salaries, that they will appoint attorneys to represent them if they accept the government desire to bring them back to their families. Groups such as Migrante International in the Philippines have long criticized the OWWA supporting “national industrialization and genuine land reform as the ultimate solution to forced migration and to end the labor export program”.

It must be said that the Indian government is stepping up to help their stranded workers, as reported by the Wall Street Journal and the New York Times dispatching officials to Saudi Arabia, setting up distribution centers in and around the city of Jeddah to provide food staples. Mufarrej al-Haqbani, Saudi Arabia’s Minister of Labor and Social Development, said the KSA government is taking over the distribution of humanitarian aid at the expense of the Kingdom as ordered by King Salman. India has also evacuated workers from Kuwait and Yemen.

Meanwhile, Shivaji Sarkar quoted at the start of this article asks: “Should we stop emigration to such countries, where Indians are treated like slaves? That is the solution according many people, including some External Affairs Ministry officials”. Labor laws in Saudi Arabia are questionable and much has been written about them. Yes, they have been improved in the last decade. The reason for workers to accept these conditions is of course, to send remittances back home. It is a choice. And remittances have largely contributed to the economy of the receiving countries and the analysis of the effects of declining remittances to Kerala are clear on highlighting the economic boom of remittances to this region as they have done in many other regions in the world. It is true what development workers insist: the importance of using remittances for investment instead of consumption to mitigate the effect of these downturns. But it is quite hard to convince a migrant family to invest for the future, as it is hard to convince any salaried worker to start a business. Or to save for hard times. It is indeed important that governments feel responsible for their migrant workers, legal or illegal in the country of destination.