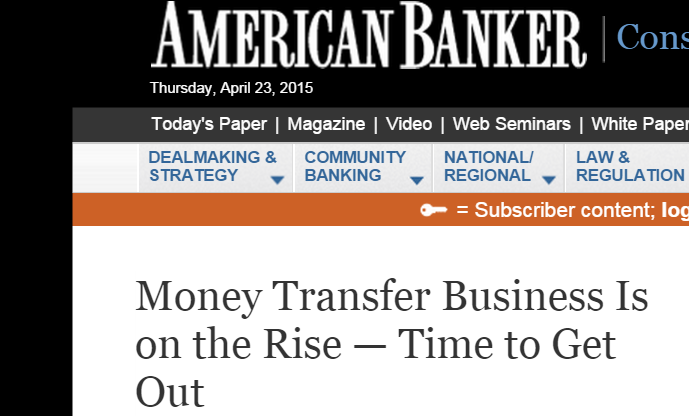 Andy Peters, the writer behind great articles at The American Banker, wrote an article entitled “Money Transfer Business Is on the Rise — Time to Get Out” that is worth reading and serves as a preview of our sessions on Bank Discontinuance at IMTC USA 2015. Is it really time to get out? Or is it the time to get in!

Andy Peters, the writer behind great articles at The American Banker, the Morning Scan Column and previously at Bloomberg and The Daily Report wrote an article entitled “Money Transfer Business Is on the Rise — Time to Get Out”. The idea behind the article is that even with international remittances on the rise, banks are walking away from them. As the World Bank has estimated it remittance flows are expected to grow at close to 10% between 2013 and 2015, reaching a global total of about 515 billion for 2015.

“But a combination of factors — intense regulatory scrutiny of anti-money-laundering rules, disruptive technology — may force many institutions in the long run to voluntarily give up on the business, or scale back dramatically, several banking attorneys, consultants and industry executives said”, Peters writes.
The exit from providing remittance services to their clients – which Banks have been doing in the last two years, with the exception of Wells Fargo, also entails the exit from providing banks account services. Bank Discontinuance and De-Risking is the name of the game, as we have previously discussed in several posts. A session at our coming conference will again discuss the new developments being faced.

Banks are required to report remittance data twice a year to the CFPB as required by the Dodd-Frank Act; last year they reported for the first time the volume of international remittances that they provide for customers and MTOs.

Peters reported: “Bank of America provided about 452,000 international remittances in the fourth quarter, with a total value of about $4.6 billion, according to its call report. That dollar figure rose 22% from the second quarter. The $4 billion-asset Wilshire Bancorp in Los Angeles, a Korean-American institution, provided about 24,000 remittances in the fourth quarter worth about $814 million. Its dollar volume was 21% higher than in the second quarter”. JP Morgan Chase reported a total of $6.2 Billion and Wells Fargo 3.8 Billion.

The first countries that have moved into the red alert lists are Somalia, Afghanistan, Iraq, Syria and other countries in East Africa, like Ethiopia and Kenya. Pakistan is in other lists and even India, the largest recipient of remittances in the world and Philippines, number three. What are regulators afraid of? Financing of Terrorism: The willingly or unwillingly help diasporas could give to insurgents in those countries. Much debate is being stirred as many consultants and people that know the industry well are shouting from the rooftops telling regulators that it is better to have all the money over the table, where it can be analyzed, studied and followed, than under the table, away from all eyes. The cut off of remittance services always end up costing more to the innocent migrants sending money home. “Merchants Bank of California in Carson, California, the only remaining bank known to provide remittances to Somalia, on Feb. 6 exited the business to satisfy a consent order about its compliance with the Bank Secrecy Act” reported Peters.

And Peters goes on to say: “Regulators have expressed concern that the remittances, while intended for needy individuals, are many times being diverted to fund terrorist groups in Somalia. However, humanitarian groups have called for the U.S. government to make some kind of accommodation, as foreign remittances provide one of the few sources of funds for the war-torn nation”. Who can be the best allies we can have to help us weed-out possible financers of terrorist groups? The corresponding Diasporas.

Time to get in?

To finish his article Andy Peters concludes: “Finally, new payments technologies, from bitcoin and peer-to-peer lenders, may force banks to re-examine their exposure to the remittance business, Morris [Richard Morris a banking attorney at the Herrick law firm] said. This is the type of business where technology will be very disruptive,” Morris said. “Within a short period of time, I suspect the remittance market will be dramatically changed.” And we agree with you Mr. Morris; when a system becomes so complex, costly and inefficient, creative thinkers and investors look elsewhere since everyone with a marketing mind understands that when there is an urgent need, unsatisfied, it’s the best ground for solutions to be developed and new services to be built. Those services will undoubtedly provide its own risks and rewards.