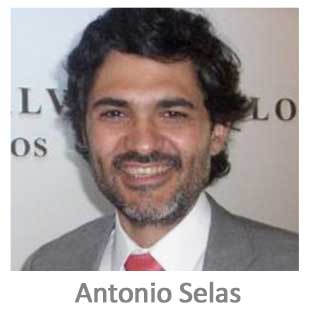 Antonio is a partner of Cremades & Calvo-Sotelo in Madrid, Spain. His professional practice is focused mainly on Industrial Property and unfair competition as well as general advising, judicial and extrajudicial defense (including the coordination of litigations in several jurisdictions) in relation to patents, marks, designs, domain names, e-commerce and commercial contracts.

Due to his professional experience in this field he has been recommended in several guides and directories dealing with international legal practice, including Best Lawyers (year 2008, 2009). According to Chambers Europe’s last published edition: Antonio Selas “has built up a strong practice that focuses chiefly on industrial property and unfair competition”. His work to prevent the closure of Bank Accounts for Money Transfer Companies is very well known. See here. The new European Payments Directive in Article 36 we further help Antonio’s work and the industry in keeping bank accounts open.

His career started in Italy where he worked at the Rome office of a USA Law Firm (1993 to 1995), in the scope of two COMETT scholarships granted by the European Communities Commission. He is part of the Madrid Bar Association (www.icam.es), the Spanish Group of the International Association for the Protection of Intellectual Property (http://www.aippi.es) and the International Trademark Association (www.inta.org) where he is member of the “Academics Subcommittee”.