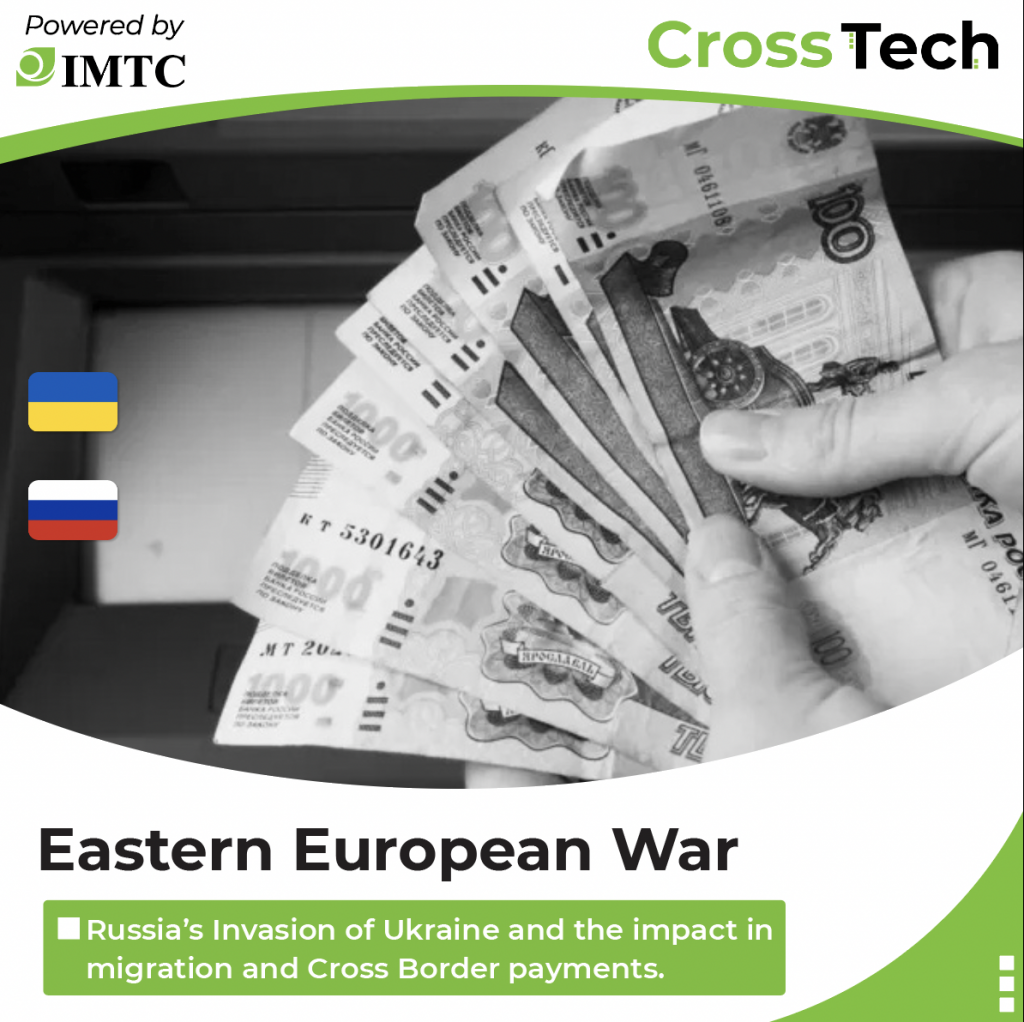 Russia’s Invasion of Ukraine and the impact in migration and Cross Border payments.

The Russian’s federation invasion of Ukraine has triggered an international response which translates into sanctions and companies leaving Russia. How will the Cross Border payments community be affected and what has the response been so far?

On February 24th, 2022, the Russian Federation initiated an invasion on the sovereign country of Ukraine thus setting off a world condemnation response against Russia’s actions which translated into a series of sanctions (Primarily from NATO/EU countries) that have had a direct and indirect impact relation with Cross Border Payments/Remittances.

The sanctions placed on the Federation of Russia will have implications not only for the Russian people but for all those central Asia countries that depend on remittances from family members working in Russia. Some of the countries that are expected to be harshly impacted by this are: Kyrgyz Republic whose remittances per GDP is as high as 31% and 83% of those came from Russia, Azerbaijan, Armenia, Tajikistan, and Uzbekistan are also expected to be heavily impacted since more than 50% of their remittances came from Russia.

Knomad and the World Bank were expecting a growth in the central Asian area of 3% for this year, but due to the war and its implications, a revised number of -25% has been shared.

Table 1. Impact of Russia-Ukraine conflict on remittances—Flows to Ukraine are likely to increase while those to other countries in Central Asia are likely to decline

Sources: Bank of Russia and KNOMAD-World Bank
Note: * Assuming decline of 40% in remittances from Russia. Projected growth rates for other source countries are assumed to remain unchanged from those reported in the Migration and Development Brief 35 (KNOMAD–World Bank, November 2021)

Condemnation from the Payments Community

The world has come together in a show of unprecedented solidarity towards the victims of the war and companies have begun closing operations in Russia to apply pressure to the government to stop their actions. The payment community has also raised their voices in support of Ukrainians and their plight.

Companies such as Binance, Goldman Sachs, JPMorgan Chase, American Express, Mastercard, Visa, Moodys have all closed operations in Russia either partially or fully.

Remittance companies have joined together to support Ukrainians in these difficult times and have agreed to remove all fees for transactions headings toward Ukraine. Western Union, MoneyGram, Ria Money Transfer, Intel Express, and TransferGo have made the transactions towards Ukraine at no fee. Euronet (the biggest ATM company in Europe) has also removed all fees for Ukrainian ATMs.

Wise, Remitly, Zepz and TransferGo have also stopped/blocked their services in Russia.

But… Is this enough? And is the scope enough? With the central bank sanctions, SWIFT removals, and Ruble price drop, Russian citizens are also being affected and put under serious constrain. And since Ukrainian refugees are fleeing their country, measures should also extend to neighboring countries, especially those who are accepting a high number of refugees. Remittances have always had a humanitarian connotation; regulation shouldn’t leave anyone behind.