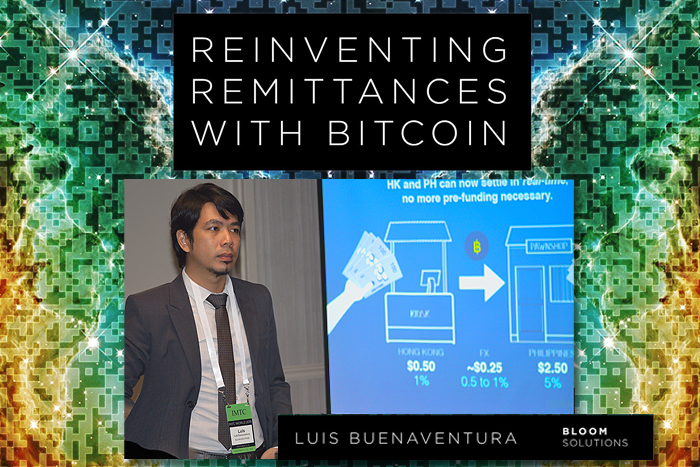 Stories from the startups on the front lines from Luis Buenaventura

Luis Buenaventura and his team at Bloom are passionate pioneers of the Bitcoin remittance industry as well as its most enthusiastic observers, and this book is their contribution back to this growing community.
Luis has spent the last few years focusing exclusively on cryptocurrency as a mechanism for cross-border money transfer, and he has managed to meet and learn from many of the other Bitcoin remittance players out there. Reinventing Remittances is a collection of conversations, essays, and real data from the field, and is illustrated with tons of graphics and photos.
The digital edition can be downliades for free here https://www.bloom.solutions/book

I think it is important for me to attract everyone from the remittance industry to read this book. Not only the book is a GREAT read but illuminating by the great majority of us, in the industry, that need to see what is happening with Bitcoin and why it is working in certain corridors around the world.

Let me give you the names of the chapters to spark your imagination and nudge to download the book:

Who is Luis Buenaventura?

Luis is a Manila-based a software architect and entrepreneur specializing in cryptocurrencies, and has been focusing on the Bitcoin remittance space since 2014.
Luis has been building tech startups in the Philippines for nearly a decade.
Early in his career he built web applications for Ayala Land International Sales, Asian Eye Institute, Red Ribbon, National Bookstore, and the SM Group of Companies. He was previously a cofounder at syndeolabs, and is the creator of several shiny social apps — Twoogie.com (featured on TechCrunch and DownloadSquad), Infinitube.net (featured on MakeUseOf, Google Blogoscoped, Mashup Awards and Killer Startups), and a whole bunch of others, such as a web startup called infinite.ly.
He was a Co Founder at Rebit.ph and Head of Product at Satoshi Citadel Industries. He popularized the term “rebittance”​ to describe the Bitcoin-to-cash solution that many similar young businesses around the world are currently offering.
With his startup Bloom, Luis helps money transfer businesses improve their processes with Bitcoin and the blockchain and focuses mainly on bringing blockchain technology to small and medium-sized money transmitters around the world.
As an avid blogger his writing on Bitcoin and its impact on remittances and mobile money has been featured on Techcrunch, Quartz, The Next Web, Tech in Asia, and Rappler.
Luis is a great speaker too and has presented on these topics at Inside Bitcoins Singapore, the International Money Transfer Conference (IMTC) in Las Vegas and Miami, the MTBIT Innovation Forum, BlockFin Vietnam, and the Brookings Blum Roundtable in Aspen. He is now the Co-Chair of the Judging Panel in the RemTECH Awards, bringing innovation in the remittance industry.
Now he has authored Reinventing Remittances with Bitcoin in 2017, which collects learnings about an improved remittance business process, as well as stories about the many startups around the world that are pioneering this new landscape.
He graduated from the University of the Philippines with a degree in Visual Communication (2002) and the University of the Philippines Integrated School (1997). Luis enjoys indie rock, criticizing bad movies and dreams about changing the world.

An excerpt from page 7: “The Mechanics”

Operating as on-ramps, they must have access to large amounts of bitcoin that they can purchase in real time. Buying bitcoin on-demand is the only way to reduce volatility risk, as holding the cryptocurrency has not proven to be a financially sound strategy over these past 12 months.

Access to an exchange with locally available pay-in methods and low trading fees is key here. In the U.S., Coinbase and Circle are at the top of the list. In Europe, Bitstamp and Kraken. In Australia, Coinjar and Independent Reserve. In Singapore, Itbit. In the Middle East, BitOasis. The list goes on.

Operating as off-ramps, the startups need to have enough buyers for the bitcoin they receive to raise sufficient fiat to make payouts to their customers’ beneficiaries. If bitcoin’s price were trending upwards, this would be a simple game of buying low and selling high, but the movement over the past year has been in the other direction.